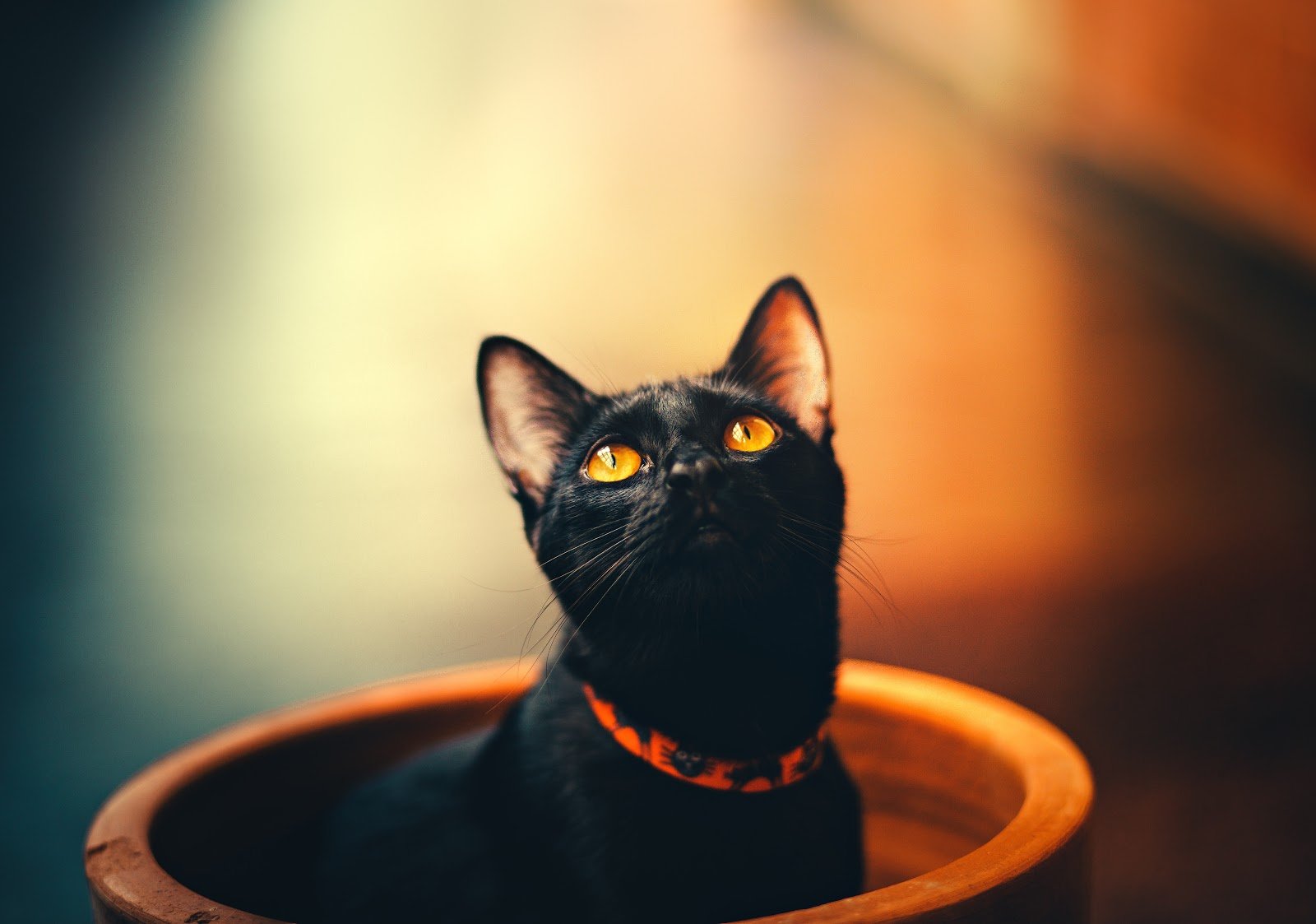 The stereotype surrounding black cats from time immemorial has been one of negativity. Black cats are often considered as a sign of bad omen, dark arts, and magic, and they are considered dangerous, even some of the black cat names back then were outrageous.

It gets worse as they are always avoided because for some extremists they are considered as harbingers of death.

In ancient cultures, all types of cats were considered as evil creatures and for some civilizations, they were to be killed on sight as people believed they were inhabited by a witch or wizard. These myths and stories lasted through centuries and millennia which made it hard for cats to be treated as domestic animals and pets.

Themed holiday festivals such as Halloween feature cats and their likeness a lot and they are named with frightening names. Names such as Phantom, Dracula and spooky names like that are given to cats.

In recent times and cultures, however, people have come to live past their fear of cats and the myths that surround them. They are accepted more as just animals that are not dangerous and make for good pets.

Black cats are no longer considered as mythical creatures that signify a looming evil or danger. People are beginning to tap into ancient cultures and lore that chose to associate cats, black cats as good creatures that possess in them the genetic makeup to cure certain human diseases.

The spookiness that was laced in the naming of black cats, their treatment and their use in certain rituals are no longer widely held and accepted. This does not mean that the air of mystery that surrounds cats and more specifically black cats is no longer there. Black cats are still named to signify vigilance, agility, pride, and rarity which are qualities that they possess already. A cat may be named after a charismatic antagonist in a story or a feared soldier or even a pop artist that is queer. They could also take the names of rare elements and precious stones such as Onyx.

Abracadabra: the magic word is Abracadabra. In magic shows, magicians carry out their appearance and disappearance tricks when they say the magic word. Naming a cat Abracadabra is cool because cats are sneaky and they could come out of nowhere. Now imagine how cool it would be to say Abracadabra and your cat appears.

Ace: Ace means a lot of things as an English word. It could mean Excellent or it could be a playing card. Whatever meaning it has it is befitting for a black cat. What is not excellent about black cats?

Alacazam:  just like Abracadabra, Alacazam also spelled as Alakazam is a magic word used by magicians when they want to perform a disappearing and appearance trick on the instant. It just gives the same effect and feeling of making your cat appear when you say a magic word. Magic can be ominous and so are cats so Alcazam is a suitable name for a black cat.

Ashes: the dark-colored ashes from fire are similar in appearance to the color of black cats. It is just a reference to the appearance of the cat and it is a great name that is just easy on the mouth.

Batman: the dark knight of Gotham city is one of the most popular superheroes. Batman is unpredictable and charismatic as well as agile. Only one animal comes to mind when these adjectives are mentioned. Calling your cat Batman is iconic and pays tribute to the superhero especially if he is your favorite.

Beelzebub:  this is another name for the devil in most folklore. Others refer to Beelzebub as the fallen angel but he is also characterized as very beautiful. Beelzebub is a dark name for your black cat and that is even most suitable.

Coal: coal is black. We even say as black as coal.

Crypt keeper: crypts are generally feared and avoided. It is like the literal gateway to the afterlife. Naming your cat crypt keeper is quite dark and ominous.

Darth Vader: the dark-suited antagonist in the Star Wars series is crafty, unpredictable and charismatic so if you are a Star Wars fan, you can allude to the movie by naming your black cat Darth Vader, Vader or Darth.

Diablo:  this is a Spanish word that means devil. The devil is known to be an agent of darkness and so could your black cat. Just kidding…or not.

Eclipse: a rare occurrence where there is darkness because an object or heavenly body is blocking the sun. The rarity and darkness that accompanies the eclipse are why it is a suitable black cat name.

Immortal: cats are said to have nine lives and always cheat death. Immortality is always associated with cats and it will be a good name for a cat.

Midnight: the darkest time of the nights when only nocturnal creatures are awake. What happens at midnight no one knows. Mystical right?

Ninja: Asian assassins are ruthless and often clad in black. They approach quietly and are very vicious. They are trained to be like a cat. It is a great name for black cats.